The sanctuary a fish invited me to visit :: WRAL.com

EDITOR’S NOTE: It was two years ago that Tom Earnhardt, recognized as the “steward of North Carolina outdoors,” first reminded us that “while many of us are ‘hunkered down,’ it is important to remember that the world around us is still beautiful, ever changing, and very much alive.” As the COVID-19 pandemic took a long-term grip on our lives, he sent “pictures of North Carolina each week—from Bald Head Island to Cape Lookout, Southport to Currituck, Umstead Park to Pilot Mountain, and from Linville Gorge and Panthertown Valley to the high peaks of Mitchell, Grandfather and Roan.” For a year of the Pandemic Tom kept that promise, sharing stunning images of the state’s natural beauty that even the long shadow of the coronavirus couldn’t obscure. Now, a year after that last regular column, he shares some more. By the way, Tom is an attorney who pioneered environmental law in the state. He is an avid naturalist and was co-producer of more than 80 episodes of the natural science television series “Exploring North Carolina.”

No matter where you live in North Carolina, springtime is filled with invitations from the natural world. In the Tar Heel Piedmont the blooming of trout lilies, bloodroot, and columbine assure us that winter’s veil is lifting. The arrival of brightly colored buntings and warblers, the emergence of early butterflies, and the kaleidoscope of greens in our forests are all invitations to pay attention to wild things and places. To be sure, nature reaches out to us in every season, but in April the call to leave our worries and cell phones at home is especially clear.

Some invitations are more subtle than others. Your summons to spend time in nature may be sung by a choir of hundreds of cricket frogs, heard in the pre-dawn chorus of newly-arrived song birds, or be seen in the ever-changing wildflowers of a longleaf savanna. Nature’s invitation can also be written in chevrons of waterfowl heading north, seashells on a barrier-island beach or in the stars of an Appalachian night.

Regardless of their form, many of us found these invitations from Mother Nature to be especially important during the past two years. During COVID-19—and more recently with a new war in eastern Europe—our collective needs for comfort, diversion, solace, and inspiration have rarely been greater. In these difficult times it should have come as no surprise that countless North Carolinians have learned, or re-discovered, why access to the natural world is a balm to both mind and body.

As a boy growing up in North Carolina in the late 1940s and 1950s water, in all its forms— farm ponds, creeks, rivers, and reservoirs—was my invitation. Water was the magnet that attracted me and held my favorite creatures. April was the time I thought about fish, constantly. I looked for fish darting in the current, hiding behind logs, in the shadows of a tree limb, or chasing other fish. Fish in every size and color beckoned to me – bright sunfish, catfish, crappie, largemouth bass, and trout.

Each of these creatures with fins and scales had a certain mystique. Sunfish were picky, bass were strong, catfish were stubborn, and trout were smart. Every angler, regardless of age, quickly learned that preferred “baits” change with the weather and the season. Throughout the warm months I found myself digging worms, looking for small frogs and salamanders, catching grasshoppers, or picking caterpillars out of bushes. Each was a food source for freshwater fish.

During this time of discovery I also encountered aquatic insects, mayflies and caddis that live their entire lives in or over the water. For my 10th birthday my father gave me a fly tying vise—a secure clamp that held small hooks in place—on which I created insect imitations out of feathers, yarn, and hair.

Over time I learned there was much more to fishing than the right bait or fly. To be even moderately successful, I practiced being quiet when approaching a stream. I moved slowly and was careful not to cast a shadow where I had seen fish. Fishing also forced me to learn the basics of camouflage.

In those early years my preoccupation with fish sometimes got me into trouble. On more than one occasion I visited ponds with less-than-clear permission. Years after the fact, my mother told me that she knew about a fishing encounter on a Davidson County farm pond, when I was asked if I had permission from the owner. I reportedly responded: “The fish invited me!”

The important thing about my near obsession with fish had a little to do with catching fish, but everything to do with the connections made with the natural world. Whether your immersion in nature began with fishing, birding, hunting, kayaking, collecting wildflowers, hiking, or wildlife photography, each of these endeavors requires us to become better observers. All of these activities can serve as portals, or highways, to a greater understanding of the natural world.

My family had a small cabin in Upper Hickory Nut Gorge, just east of Asheville. In the summer of my 16th year I had a job at a swimming pool as a lifeguard, but soon found that lifeguarding cut into my fishing time. I asked my parents if I could skip church on Sunday mornings so that I could fish in nearby trout streams before reporting to the pool at noon. Mom and Dad informed me that to skip church on Sunday mornings, I would have to ask permission of the pastor at Bearwallow Baptist Church*.

After the next Sunday service, with great trepidation I approached Reverend Roy Bradford, a full-time deputy sheriff and part-time preacher, and told him that fishing was my favorite activity. I ask him if it would be all right to skip church “a few” Sundays each month to chase some really big trout on the Davidson River. I assured him that I only used flies that I tied myself, and had long ago sworn off using live bait when trout fishing.

Much to my surprise, Reverend Bradford said he didn’t care how big the trout were or what kind of bait I used. He was, however, concerned about what I saw when I went fishing. Bradford wanted me to describe the places I fished and tell him what made them special.

I remember describing the hemlocks, white pines, and rhododendron next to Davidson and other rivers. I may have mentioned trillium, Dutchman’s britches, and Jack-in-the-pulpit near the streams. I told him that the water of the Davidson River was so clear you could see the bottom where it was 10-feet deep. Finally, I reported that I had seen wild turkey, grouse, and black bear next to my favorite trout streams.

After a few minutes, Reverend Bradford stopped me and said that I had his permission to miss an “occasional Sunday service” as long was I would tell him what I had seen on my fishing excursions. He concluded by saying:

“This is a beautiful little church, but it does not compare with the outdoor sanctuary that you just described around your trout streams.”

Since that Sunday more than 60 years ago, I have relied heavily on Reverend Bradford’s get-out-of-church-free pass. It is the only time a member of the clergy has ever given me “absolution for fishing” or for spending time in nature. In the decades since, I have been careful not to ask any other faith leader for a second opinion.

In the month of April, 2022, in this most beautiful of states—North Carolina—I can assure you that invitations to connect with the natural world are all around you. Whether your invitation comes in the form of birds, reptiles, mammals, aquatic insects, towering trees, or one of the many freshwater fish native to this state, you will become a part of a world in which all things are connected. I do not know where you live, work, or worship, but Roy Bradford was right: No human-made structure can compare with the grandeur of the natural world.

How did I gain entry to that world? A fish invited me!

In the Tar Heel Piedmont the blooming of trout lilies and columbine assure us that winter’s veil is lifting. 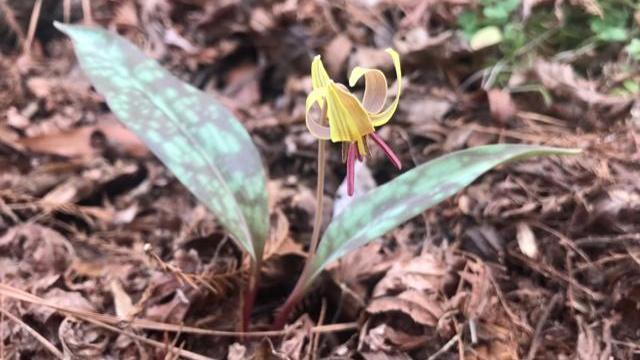 The trout lily is often one of the first wildflowers to bloom in moist Piedmont forests. 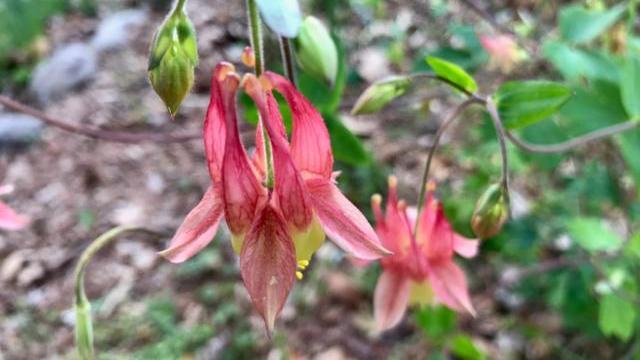 Columbine is an elegant early wildflower in the Piedmont and mountains.

The arrival of brightly colored buntings and warblers, the emergence of early butterflies, and the kaleidoscope of greens in our forests are all invitations to pay attention to wild things and places. 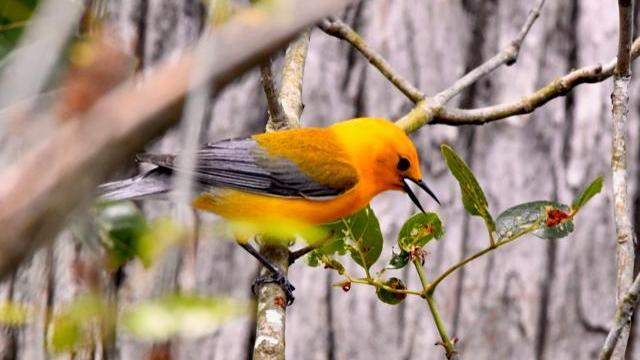 Prothonotary warblers are common along rivers of the coastal plain beginning in April. 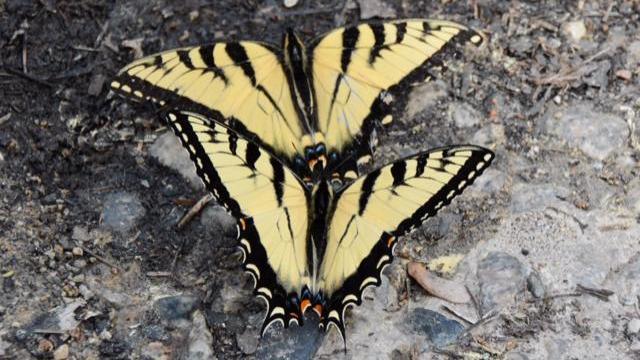 These tiger swallowtails were on the bank of the Roanoke River at Williamston in mid April. 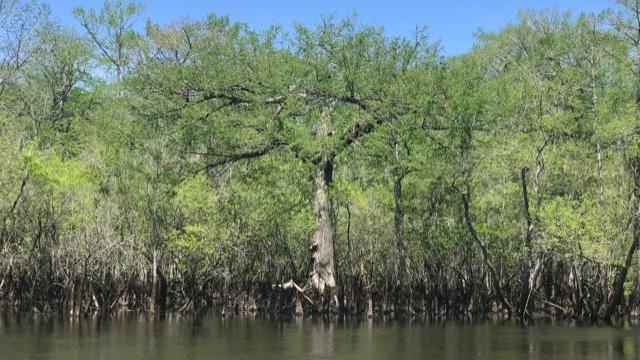 Water was the magnet that attracted me and held my favorite creatures. April was the time I thought about fish, constantly. 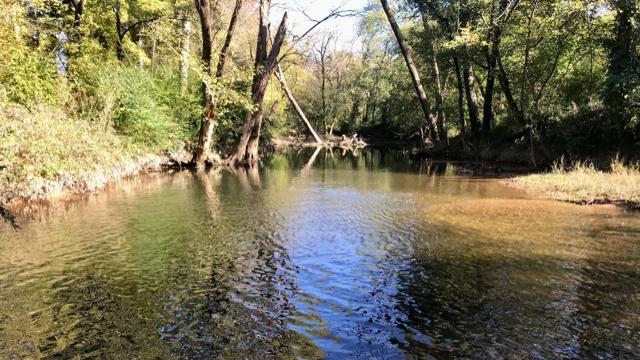 Morgan Creek in Orange County is such a magnet. 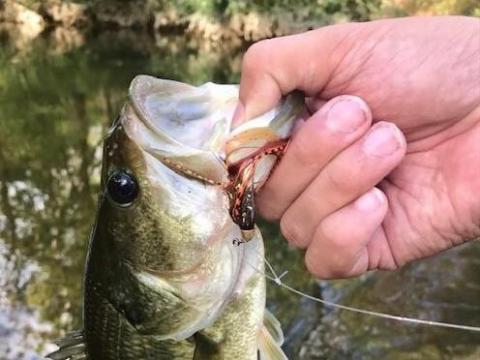 From many North Carolina children, the largemouth bass is the ultimate catch. 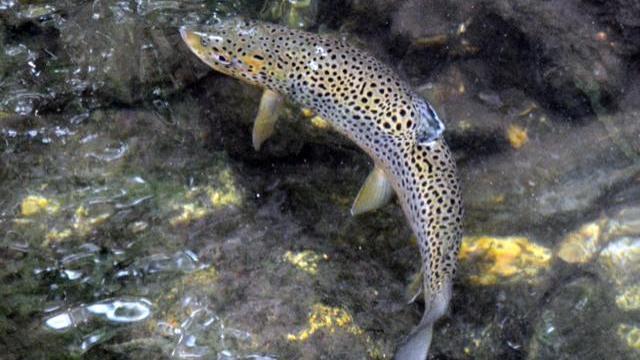 For young anglers, trout are often thought of as the “smartest” fish in the stream. 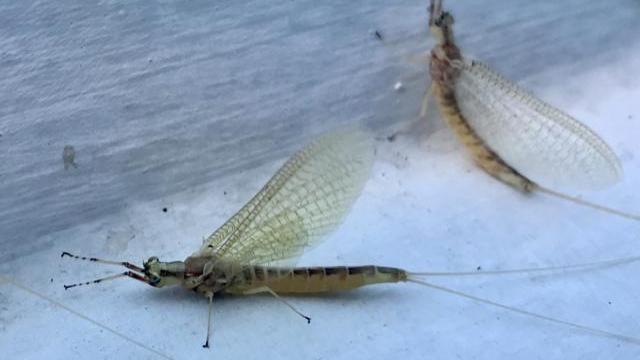 To have diverse fish populations, we must also have clean water and healthy populations of aquatic insects, like these mayflies. Everything is connected.

* NOTE: There’s more to the story of Reverend Roy Bradford and Bearwallow Baptist Church in the book, Crossroads of the Natural World, published by the UNC Press, 2013

Capitol Broadcasting Company’s Opinion Section seeks a broad range of comments and letters to the editor. Our Comments beside each opinion column offer the opportunity to engage in a dialogue about this article.

In addition, we invite you to write a letter to the editor about this or any other opinion articles. Here are some tips on submissions >> SUBMIT A LETTER TO THE EDITOR